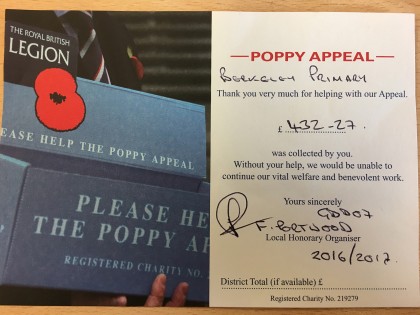 Last Friday was Remembrance day otherwise known as Armistice day: The eleventh hour of the eleventh day of the eleventh month marks the signing of the Armistice, on 11th November 1918, to signal the end of World War One.

In memorial of this, children sold poppies and other related merchandise - in the playground throughout the week. This year, as part of the 'Rethink Remembrance' campaign children have been learning about all those men and women who were killed during the two World Wars; also, raising awareness of the sacrifices made by armed forces in more recent conflicts.

Year 5 lead the assembly that week and told everyone about the significance of the poppy and the relevance of the 2 minutes silence, they finished with the famous 'In Flanders fields' poem by John Mcrae.

On Friday at 11am, the school gathered in the hall to mark the national 2 minutes silence. The children were very reflective and respectful during this time.

Thank you to everyone who purchased a poppy or stationary item. The school raised £432.27 for the Royal British legion Poppy Appeal, supporting the Armed Forces Community.