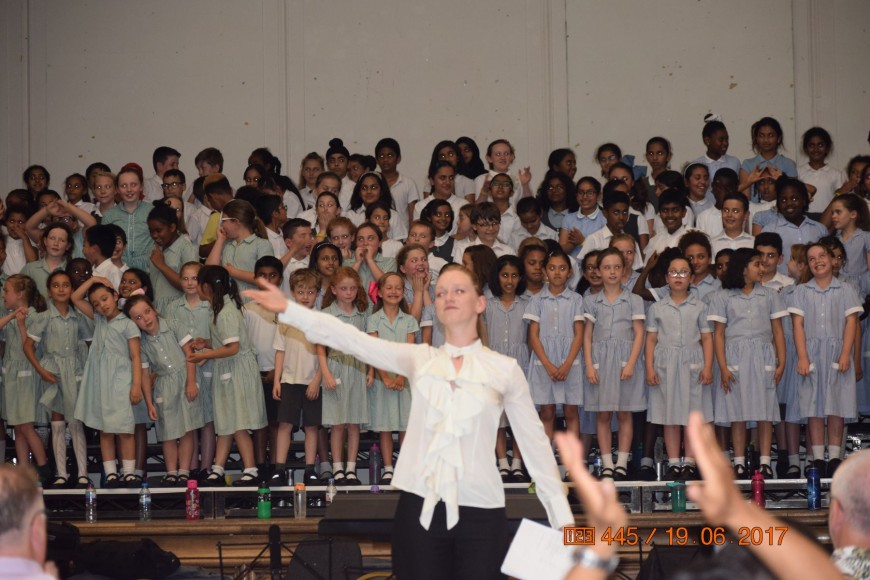 As we stood on stage at Hammersmith Town Hall ready to rehearse the songs ahead of the main performance, the conductor reminded us that we were in a professional musical environment. There was a professional band playing, we were in a genuine musical and cultural venue; she was impressing upon us how important it was that we performed to the very highest standard possible. On hearing this, the Berkeley children stood taller and lifted their chins with pride. This was the moment they had prepared for, after all, they were excited to be able to show just how much work they had put in over the preceding few weeks.

And what a performance it was! As the opening chords to the first song were struck, a few of our Berkeley pupils were placed front and centre, ready to sing a solo part (Maisoon Nejrabi) and as a small group (Connor Riley, Arshman Mehar and Anmol Matta) respectively. The crowd fell silent, awestruck. For the rest of the performance the children sang with gusto and vivacity, smiling brightly, performing actions with panache and generally not seeming like young people who had put in an incredible amount of work over a very long and strenuous (and hot!) day.

Afterwards, both children and adults were buzzing with energy and excitement, still processing what had taken place - we had just performed in front of a few hundred people, at a place of cultural significance, and had done - if we do say so ourselves - a rather tremendous job.

The quality of the children's performance is nothing but a testament to the work and dedication they put in, learning the songs with me, giving up their lunchtimes to go to extra sessions and practising at home. They should be at least as proud of themselves as we all are of them.